The Pyramid is in reality a radar system. When the site was in operation, it included dozens of launch silos for nuclear weapons.

The complex took $6 billion to construct. Once completed, the site was in operation for less than three days. The Defense Department concluded, after all the time and expense of building the complex, that it would not be effective. There was also a concern that missiles would accidentally be detonated over friendly territory.

The North Dakota Buffalo Foundation at Jamestown is home to three very rare albino buffalo. In addition, the Foundation has other “traditionally colored” bison in its herd as well.

The albino buffalo can be seen roaming about on the ranch maintained by the Foundation. What makes these albino bison even rarer is the fact that they are female. Female albino buffalo are far less commonplace than albino males.

The middle of the North American continent is in North Dakota. There is a monument in Rugby acknowledging this reality. 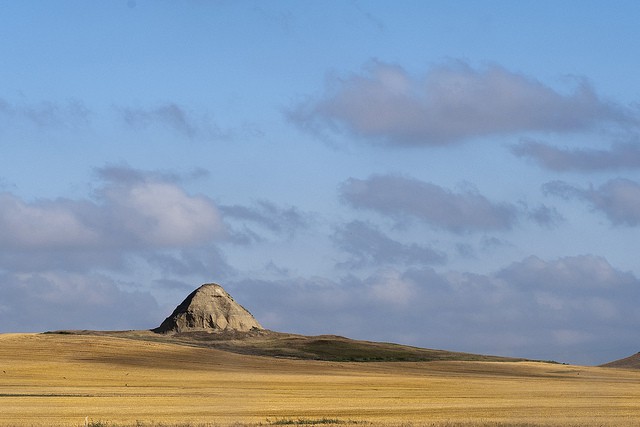 The military name of the site technically is Oscar-Zero Missile Alert Facility and the November-33 Launch Facility. It had been managed by the Grand Forks Air Force Base.

A grim monument is found on the plains of North Dakota at Wahpeton, North Dakota. The Tent Pole Monument to Circus Dead was erected to commemorate two circus workers who were killed by lightening in that town.

On June 10, 1897, the Ringling Brothers Circus came to Wahpeton. When putting up the tent, a storm raged in, with lightening that ended up taking the lives of these men. Despite the deaths, the show did go on.

The movie “Fargo” was critically acclaimed and highly popular. The movie draws to an end with a gruesome sequence involving a wood chipper. The wood chipper has become a popular tourist “site” and is located on the west end of the city of Fargo itself at the F + M Visitors Center.

Tourists pop in to see the wood chipper, particular fans of the movies. It is common for a visitor to take a selfie with the former movie prop.

The world’s largest buffalo is a roadside sculpture at Jamestown that clocks in at 46 feet long and 26 feet high. The sculpture weighs as much as 60 real life buffalos.

The KVLY-TV mast towers above the Western Hemisphere at an amazing 2,063 feet. The structure has collapsed and been rebuilt twice. In 1968, a Marine helicopter crashed into it and in 1997, an ice storm with 70 mph winds, resulted in the structure’s collapse.

Jessica Kane is a professional blogger who writes for Documents International LLC, a leading apostille service for individuals and businesses.

London, UK: 5 Amazing Things You Can Do For Free

New York Travel Guide with Kids: What You Need to Know